Extend the life of your products with the expert performance of Wakefield Thermal's vapor chambers. 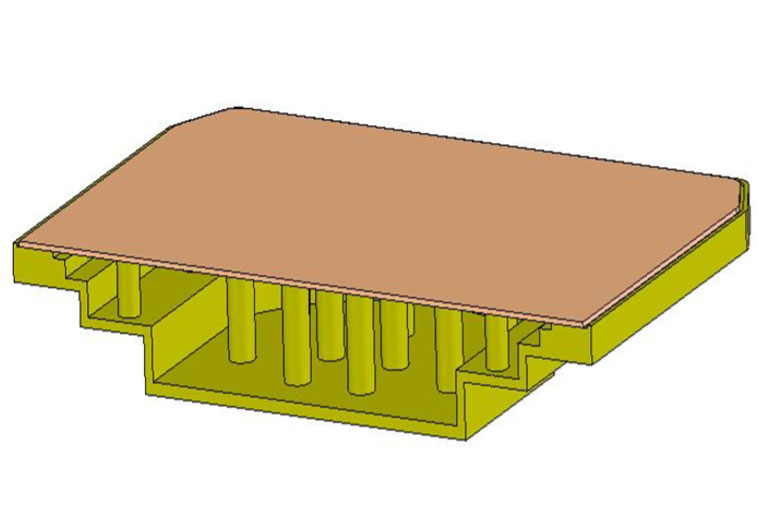 Vapor Chambers are used to transport heat over a distance with very low thermal resistance. This is very helpful when small heat sources need to be dissipated over a larger area. Vapor chambers are a Fluid Phase Change application because they use a closed loop to transfer heat quickly through evaporation and condensation within the chamber. The particular aspect useful in designs is that vapor chambers transport heat in a plane, more effectively “spreading heat” compared to a heat pipe which transports heat over a distance in a straight line. Vapor chambers, like heat pipes, do not actually dissipate the heat to the environment, but serve to move heat efficiently within a thermal system. A vapor chamber is made from copper plates (top and bottom) with an internal wick structure that is sealed around the perimeter with a small amount of water inside. As heat is applied to the chamber, the water will boil and turn to a gas, which then travels to the colder section of the vapor chamber, where heat is dissipated through an external heat exchanger, where it condenses back to a liquid. It is the evaporating and condensing of the water that form a pumping action to move the water (and thus the heat) from the area of the heat source to all other areas of the vapor chamber.

There are a few types of wick structure that can be used within the vapor chamber, but most commercial chambers are classified as mesh or powder. In both cases, the powder or mess line the copper plate surfaces to allow water flow to/from all directions within the area of the vapor chamber. Often, when mesh is used as the wick structure, different sized meshes are used together to promote condensation or transport of liquid depending on the void size. Vapor chambers are best used in horizontal orientations. The effects of gravity may vary depending on application and orientation, but one must consider lower performance if used above 15° out of horizontal. During the manufacturing process copper columns are used throughout the vapor chamber to support the plates that act as the lids and contain the liquid and vapor. The copper mesh is oriented within the chamber pressed against the copper plates. The plates are sealed around the perimeter via diffusion bonding. In some cases, soldering or welding are used, but diffusion bonding allows for the strongest and highest temperature compatible seal for the vapor chamber. The diffusion bonding process also allows the mesh to bond to the copper plates as well.

Vapor chambers are used in many harsh environments such as:

Vapor chambers have proven to be robust and reliable over many years in these types of applications. The next section will give more technical detail on the performance of vapor chambers depending on thickness and area.